Parking.com offers convenient parking near many Broadway theaters in NYC. Discount coupons and online pre-purchases are available for select parking locations. Choose from the list below for more information on parking or to reserve a guaranteed space. Don’t forget to download the free Parking.com mobile app for directions to the garage or to bring your mobile coupon or parking pass with you. 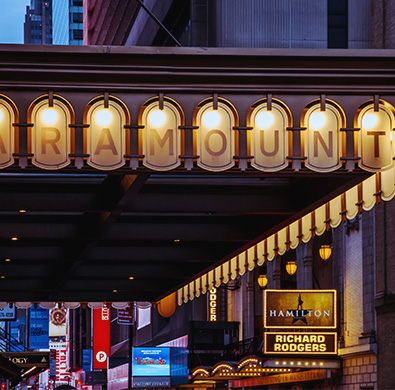 With over 41 Broadway theaters, NYC’s Theater District is comparable to London’s West End theatre in size and attendance. Although most theaters are located along Broadway in Times Square and Midtown Manhattan, Broadway theatre refers not to the location but to performances presented in theaters with 500 or more seats. Many Tony-Award winners made their debuts on NYC stages, and some continue to call Broadway their home, including Hamilton, Chicago, and The Lion King. While there are many popular long-running shows in NYC, the newcomers shouldn’t be overlooked. Shows such as FROZEN the Musical, Come From Away, and Dear Evan Hansen are known to dazzle audiences with their energetic performances. Whether you’re looking for a comedy, drama, or musical, there are plenty of Broadway shows for you to choose from—making NYC one of the cultural capitals of the nation.